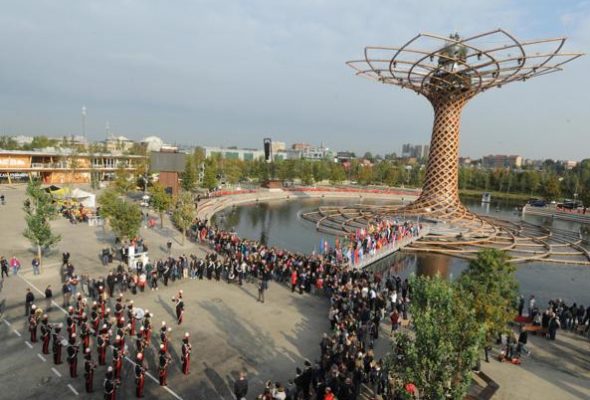 In the aftermath of the Milan Expo ‘Feeding the Planet, Energy for Life’, there is little sign of allegiance to the post-Expo values in Italy, says Hands on the Land partner Crocevia in a press release (Italian).

Instead, the debate is dominated by the reconversion of the Milan facilities and the still open debts. Expo nor post-Expo have been able to reconcile Italy with its true agriculture, as practised by more than 3.5 million women and men who work and produce an important part of the material wealth in Italy.

Disregarded values
Among the disregarded values, despite slogans, there is the one of contributing to eliminate the hunger contrasting poverty. Minister of agriculture Maurizio Martina clearly did not get the message of the Committee on World Food Security of the United Nations; he limited himself to organise a prize travel to the Expo for government delegates.

Hunger, differently from what the Italian government wants us to believe, cannot be fought with technology, only by distributing the wealth and the necessary resources to food production. The 21 million euros invested by MIPAF for sustainable biotechnology and precision and digital agriculture are smoke and mirrors.

Figures on the sector of Italian biotechnologies confirm that companies are not at all interested in food: on a total sales volume little more than 9 billion euros, more than 6 billion are by companies that deal with biotechnology for health. Of the 44 companies that develop applications of genetic engineering for agriculture and food, two thirds are ‘micro companies’ that can barely imagine themselves as an engine of development in Italy.

In terms of value, all the biotech companies together are worth less than the farms that employ fewer than 1 AWU (Annual Working Unit), realising an agricultural production that exceeds 10 billion euros per year.

Efficient small-scale farming
While for Italian agriculture less than 60 percent of the country area is still available, Istat data give a clear image: two thirds of the Italian farms, even with areas smaller than 5 hectares, show evidence of economic efficiency, with farms that invoice less than 15 thousand euros per year accounting for more than 10 percent of the total agricultural production. Including the farms that invoice until 50 thousand euros, small scale farms account for over 27 percent of the value of agricultural production in Italy.

The Italian government seems not to take care at all of this endowment. Instead it bets on the food export myth that will strengthen the multinationals in the sector, presumably in damage of the small and medium Italian companies that still exist, which live of local and national food consumption, that is struggling to regain some force following the economic crisis.