ECVC Pushes for a United Front in Defense of Seeds 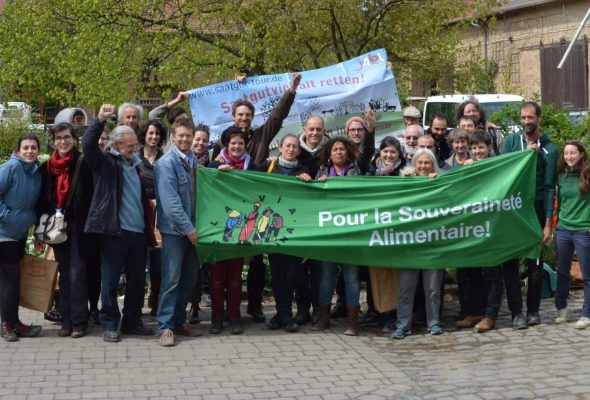 ECVC pushes for a European united front to prohibit patents on living organisms and to promote farmers’ rights to seeds and peasant resilient seed systems.

The European Coordination Via Campesina (ECVC) Seed Group organized a meeting on April 22th to 24th at the Farm in Dottenfelder Hof in the periphery of Frankfort (Germany), in order to intensify information exchanges on the breeding, exchange and use of seeds. During this meeting, different proposals and concrete practices have been discussed to strengthen peasants’ rights regarding seeds and their protection against GMOs (Genetically Modified Organism).

Among the issues considered, we can mention:

This Treaty recognizes the right of farmers to conserve, use, exchange and sell their seeds. However, it does not have a robust system for disciplining states that ignore it, hence abandonning the seeds conserved by its peasants and their native genes to he patent system. For this reason ECVC demands that the Treaty trully defend peasants’ rights, that it ensure peasants have access to the entire diversity of peasants seeds engendered in their fields and that they be protected against biopiracy.

The preservation, renewal and sustainable use of plant genetic resources is based primarily on farmers’ rights, so that they can use, replant, exchange and sell their plants Any restriction to those rights are contrary to the treaty’s objectives.

The Treaty must prohibit any intellectual property right or any form of limitation that prevents an easy access to research, conservation, food and agriculture training, as well as to agricultural crops, to the multilateral System of plant genetic resources or to a part of natives genes or genetic component of this resources.