Disputed Nature – Biodiversity and its Convention 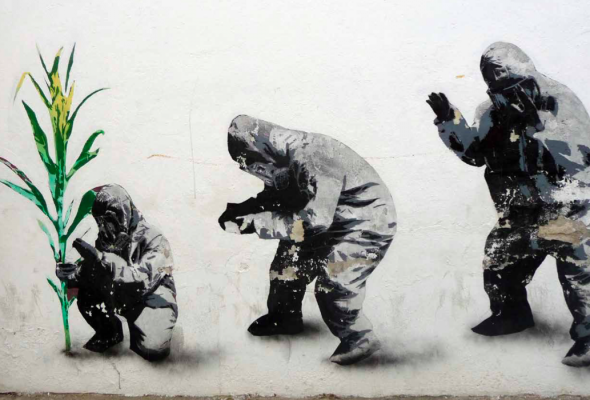 Biodiversity loss is the most important global threat, not climate change. At least, that is what researchers at the Stockholm Resilience Centre say. The planetary boundaries model they have developed is currently the most popular systematisation of global processes.

The findings on biodiversity are indeed shocking: species are vanishing at such high speed that researchers are talking in terms of a sixth major mass extinction happening within human history. Except that this time it will not be caused by a geological disaster, but by human beings, our production and consumption patterns and our modes of living. The consequences of this process are completely uncertain. What is clear is that they affect the fundamentals of life on the planet: abundant diversity is the foundation of evolution and the secret of its success. The “rivet hypothesis” illustrates this principle: we are acting like someone who enjoys popping the small rivets out of an aircraft, convinced that it can stay airborne without them – but at some point, the fun will end badly.

The incisive analysis and alarming statistics are not matched by a proportionate public awareness or a political agenda. We know a vast amount but we are taking very little action. Summed up in a nutshell, all the talk is about the climate. Indeed, climate change has virtually been hammered into the public mind, and – albeit with certain shortcomings and contradictions – has penetrated the political mainstream, from Argentina to Zimbabwe; even North Korea is an upstanding member of the Framework Convention on Climate Change (UNFCCC). Global environmental policy increasingly resembles a crusade against CO2 – by common consent, the environmental Public Enemy No. 1.

Given the attention devoted to climate change, the biodiversity community struggles. Complaints about this are routine, and hardly further their cause. There is no sense in starting a competition over which is the greater evil. Studies like those done by the Stockholm Resilience Centre suggest one key conclusion: the global environmental crisis is multidimensional and must be perceived as such, and tackled politically. Herein lies the immediate danger of the excessive emphasis on the climate discourse. Part of the reason for the climate’s dominance is certainly that climate policy has far closer links with big business interests, and is perceived by many actors as an element of “green” modernisation that can also help to open up new business segments.

However justified the concern about climate change, its dominance can become equally dangerous. It can pave the way for questionable technologies, all of which can be rationalised in terms of combating climate change. Climate change now has a stringent and popularised narrative; by comparison, the debate about biodiversity does not have an easy time, but it does bring a necessary element of complexity into the discussion of global environmental policy.

That said, biodiversity has popular narratives of its own: the threatened status of elephants, orangutans or other “charismatic species” is vividly featured in the images of the large nature conservation organisations. So the dominant idea in the public mind has become the link between biodiversity and nature conservation. This also influences the perception of the Convention on Biological Diversity (CBD) which, along with the Framework Convention on Climate Change (UNFCCC) and the United Nations Convention to Combat Desertification (UNCCD), belongs to the UN’s trio of Rio Conventions.

But the CBD is about much more than the conservation of nature and species; it is a complex convention which sets out to regulate access to “genetic resources”, and is already propagating a fateful paradigm with this dubious concept. The CBD also extends to nature as transformed by humans. People have systematically turned nature to their purposes by selective breeding, thereby also creating a form of biodiversity. Genetic engineering radicalises and fundamentally modifies this human redesigning of nature. Not only does genetic engineering makes human-designed nature a trading commodity, but also paves the way for patenting and monopolising seed, plants and even animals. That is a far-reaching process which fundamentally reshapes society’s relationships with nature – and is therefore eminently important for current (development) policy debates.

We are in the middle of this process and the ensuing political disputes. It is no coincidence that genetic engineering has become a topic of huge controversy. It is, we think, a fundamental topic for discussion, because biodiversity is not just about the conservation of nature but also – and especially – about the appropriation of nature. Social and environmental conflicts over land use are intimately linked to the question of the appropriation of nature.
The CBD is also a central venue for another important debate about the relationship with nature. Economisation and monetisation of nature’s services are viewed as the future of a new policy of nature. This approach has made its mark on the CBD but remains fiercely contested.

The CBD takes up these complex questions – that is its great achievement; clearly, it cannot solve them. But the CBD has become an important international forum for the debate on these issues, as well as a regulatory starting point. So it is our belief that, irrespective of the limitations of UN Conventions, the discussion of biodiversity and the CBD is a matter of great paradigmatic and practical significance. Unfortunately, many development-policy-oriented groups in civil society have lost sight of this and largely left the monitoring of the CBD to a few large environmental organisations. Another unhelpful aspect was that in the context of the CBD, the debate about equitable access to biodiversity – conducted under the popular heading of “biopiracy” – turned into a specialised debate that was highly complex and hard to assimilate or even follow, so that before long only a tiny minority were able or willing to do so.

The present publication introducing this complex issue area is a joint attempt by the Centre for Research and Documentation Chile-Latin America (Forschungs- und Dokumentationszentrum Chile-Lateinamerika e. V. – FDCL) and the Heinrich Böll Foundation to clarify the vital development-policy significance of the discussion over biodiversity. It is not a systematic reappraisal of the many fields addressed by the CBD – we are deliberately selective because we want to take up and present two key and current fields of conflict: the discussion about an economic approach in nature conservation, and the new, radical forms of genetic technology. Both thematic complexes will play an important role at the forthcoming Conference of the Parties to the CBD in December 2016 in Cancún, Mexico. It has also become an urgent necessity to mobilise civil society actors in both the global South and the North for a critical discussion of these issues.

A short introductory overview of the genesis and history of the CBD aims to clarify the context of these current debates, reveal the contradictions of the CBD, and sound out the options to influence the process. The publication is not addressed to CBD specialists but provides an up-to-date introduction for the particular benefit of those who have not followed the debate about biodiversity policy and the CBD in depth.