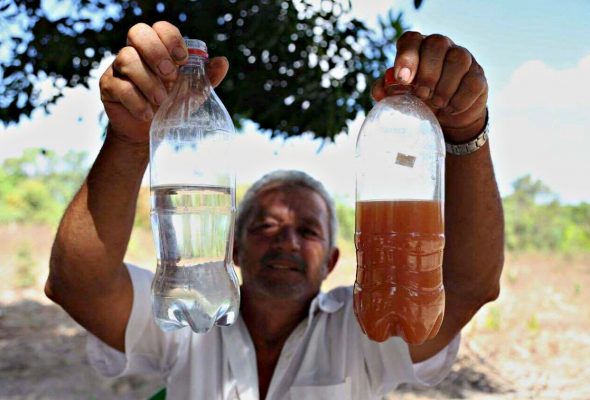 The international fact finding mission ‘Caravana MATOPIBA’ visited communities in the northeast of Brazil this week to investigate the social, environmental and human rights impacts of expanding soy monocultures. The delegation will share its alarming observations with the Brazilian authorities, in public hearings and press conferences.


The fact-finding mission, comprised of 30 human rights, development and rural experts, travelled to several communities in the south of Piauí, a region that has seen a huge expansion of soy plantations in recent years. Apart from causing widespread devastation of an important biome (the Cerrado), the monocultures heavily impact the traditional peasant communities living in the area.

Testimonies recorded by the delegation in the communities of Melancias, Baixão Fechado, Sete Lagoas, Brejo das Meninas, Santa Fé all tell similar stories. The villagers suffer from diminishing water resources as a result of deforestation and high levels of agrochemical pollution causing serious health issues. This is triggered by the invasion of their traditional lands by land grabbers (locally known as ‘grileiros’), who cut down the natural vegetation and falsify land titles to re-sell the land to agribusiness. In all visits, the team found clear indications that the environmental degradation is putting the right to food, water and health of communities at great risk.

Pesticides and death threats
Mr. Juarez, leader of the Melancias community, told the observers that pesticides used on the plantations flow directly into the river during the rainy season. This makes it impossible for them to use the water, as doing so would lead to a wide range of health problems, including nausea, vertigo and skin irritation. Furthermore, planes hover over the plantations dropping pesticides, that are also blown into the community lands. Female villagers pointed out that the lower groundwater levels resulting from water usage by the plantations lead to diminishing harvests such as that of the Buriti palm.

The presence of large-scale farmers, land grabbers, scouts and militias can be felt throughout the region. Community members are constantly intimidated and forced to leave their land, with some of them selling at a very low price. A high number of local families end up moving to the favelas of big cities, where they are bound to live at the margins of society. On this note, the delegation learned about the case of the community of Sete Lagoas, which recently reported over ten cases of intimidation against Dahma, a neighbouring company that arranges the ‘security’ for the grileiros. Despite a court order ruling in favour of the villagers, the threats continue.

The state of Brazil remains absent
The delegation ascertained a clear absence of the state in the communities. The state of Brazil fails to guarantee and protect the land and territorial rights and to ensure the application of public policies in the communities. Commenting on the visit, FIAN International’s senior advisor Flavio Valente said: “The Brazilian state has not only been totally absent in protecting traditional communities against the plundering by land grabbers, but also criminal with the promotion of agro-industrial business in the area. This has led to a wave of unacceptable violence against the people, with total impunity.”

Agribusiness companies operating in the area receive funding from pension funds based in the US, Canada, Sweden, the Netherlands and Germany. The delegation recalls that these states must fulfil their extraterritorial obligations by ensuring activities of pension funds are not involved in human rights abuses and violations, as well as the destruction of the environment in the region.

Public hearings and press conference
The testimonies by the communities, as well as observations and recommendations by the delegation will be the subject of public hearings in Bom Jesus, Teresina and Brasilia. A press conference for national and international media will follow on September 14 at the Memorial da Procuradoria Geral da República (St. de Administração Federal Sul – Zona Cívico-Administrativa, Brasília/DF).

A preliminary report with recommendations will be shared with the Brazilian authorities, followed by a final report by the end of 2017.