Hands On The Land Campaign Kickoff 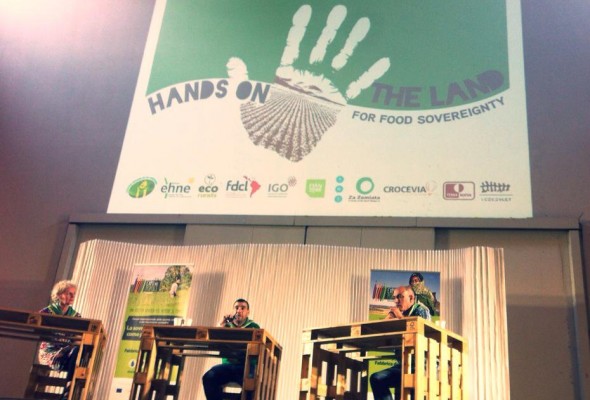 An alliance of 16 European organisations, including peasant movements, environmental, and human rights groups presented today ‘Hands on the Land for Food Sovereignty’. Launched at the civil society-organised Expo dei Popoli in Milan, the collective campaign will support alternative solutions around the food-energy-land-climate nexus, disregarded at the official Expo 2015. The partners in the campaign have a long history of engagement in support of movements’ struggles for democratic control of the food system and access to land.

Speaking at the press conference today, Ibrahim Coulibaly, representative of Coordination Nationale des Organisations Paysannes du Mali (CNOP), explored the pressing problems around access to land, and insisted that natural resources are not commodities but a matter of human rights. “In Mali, we have witnessed how hundreds of peasants are evicted from the land they have been working for decades, as well as arrested for resisting from leaving. Having their rights constantly violated, peasants end up migrating to the cities where they have no chance to find a job, or see themselves dying when trying to cross the Mediterranean,” he said.

Within the context of the European Year for Development, the panel stressed the need to address incoherent EU policies, as well as their impact on small-scale food producers in the north and south. As Hanny van Geel, member of the European Coordination of Via Campesina stated, “The EU development framework, through such things as public-private partnerships and export-orientated agriculture, makes farmers dependent on globalised food chains, rather than treating them as investors in their own right, to be supported by public policies and investments. The result is that, in the name of food security, EU development policy is destroying small food producers across the north and south that sustainably feed the world, while privileging large agro-industry”.

The Hands on the Land campaign puts the people that actually produce most of the world’s food and care for the land, including peasants, pastoralists, fisher-folk, at the heart of solutions to the food and climate crises. Showcasing that alternatives work in practice, Alejandra Serrato Delgado, Sindicato Obrero del Campo (SOC) representative remarks: “In Andalucia, Spain, we have seen how alternative ways to the dominant approach have succeeded. Specifically in a town close to Seville, after succeeding in recovering some land, we have been producing and processing food, and also ensured full employment to all inhabitants. We don’t speak of land ownership, but land access, crucial to ensure the right to food.”

The initiative will work towards putting the visions and aspirations of those at the frontline of struggles for food sovereignty. Over the next three years, the European-wide campaign will conduct a wide range of activities, including trainings, education and advocacy work, as well as evidence-based research, targeting citizens, media, social-activists and policy-makers, among others.

Read more about our vision in the ‘about’ section.

Photos of the launch.